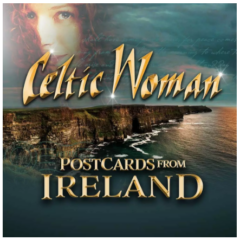 Returning to the group is Chloë Agnew, an original member who began working with Celtic Woman at age 14. A soprano, she sings in English, Irish, Latin, Japanese, Italian and German. Joining her are soprano Megan Walsh, fiddle, and Irish harp maestro Tara McNeill, as well as the newest member of the group, soprano Muirgen O’Mahony.
The “POSTCARDS FROM IRELAND” tour and album convey a true message of love, hope and expectation as the world looks toward getting back together again. Celtic Woman feels there is no better way to express these wishes than to write and send a postcard, but this postcard is written with the music and songs from their latest album. The 13 brand new songs on “POSTCARDS FROM IRELAND”, to be released October 29, feature new arrangements of beautiful and iconic songs including “The Dawning of the Day”, “Wild Mountain Thyme”, “The Galway Shawl” and “Black is the Color”, among others.

You do not have the rights to manage this Event.